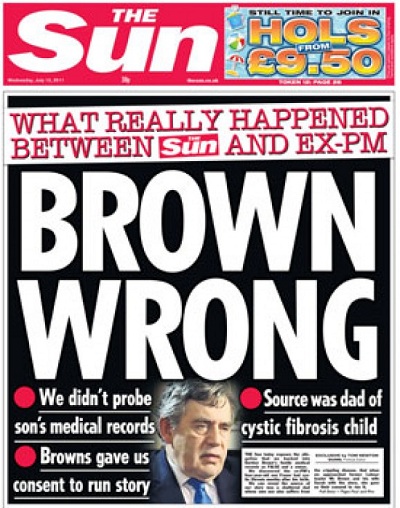 Can other attackers expect the same treatment?

After a week and half of News International being battered over the hacking allegations the Sun responds furiously this morning to the claims by the former PM, Gordon Brown, that the medical records of his son, Fraser had been hacked into.

It writes:“THE Sun today exposes the allegation that we hacked into Gordon Brown’s family medical records as FALSE and a smear.

We discovered the ex-PM’s four-year-old son Fraser had cystic fibrosis months after his birth.

We can reveal the source of our information was a shattered dad whose own son also has the crippling disease and who wanted to highlight the plight of sufferers.

And when we approached former Labour leader Mr Brown and his wife Sarah with the story, she gave us their consent to run it…”

Today’s front page defence of its actions comes as MPs prepare to debate a Labour motion calling on Mr. Murdoch to withdraw his bid for the 61% of BskyB that is not already owned by News International. This is being backed by the Tories and Lib Dems and, looks set to be agreed by a huge majority.

The message I get from this is that News International is not going to go down without a fight and any allegation that is not 100% valid is going to be contested line by line.