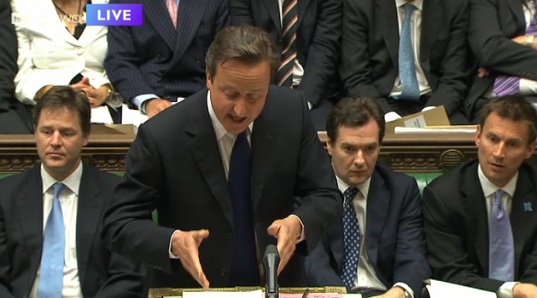 Should he have just stuck to the inquiry process?

It was a good PMQs today with Cameron performing substantially better than last week and at last Friday’s press conference. I gave it to the PM by 8 to 7 over Ed Miliband.

Where the opposition leader did not get it quite right was when, in his six allocated questions, he sought to move on from the process into attacking Cameron on Coulson. This changed the tone of the occasion and I thought that Ed mis-judged it.

Cameron has been behind the curve but has caught up fast in time for today’s occasion. Ed should have continued his magnanimity and brought in the Coulson issue in as a process question. Instead he sought to raise the temperature which allowed Dave to bring in Tom Baldwin and Damian McBride.

Getting the tone right is very difficult and Ed didn’t read it correctly. His strategy over the past few days has to make this above politics – the way he did it today made it a party political matter – a mistake.