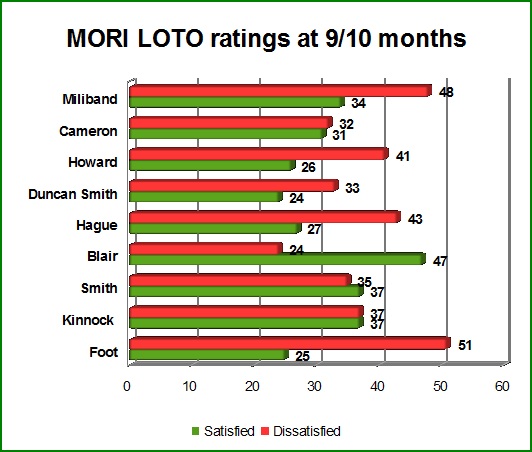 Will he really be “sunk without trace”?

The “Ed is crap” media narrative continues this morning with Professor John Curtice being quoted in the Indy as saying “Since 1979 all previous opposition leaders with unambiguously negative poll ratings at this stage in their leadership have eventually sunk without trace”.

But Curtice’s 1979 date qualification excludes Margaret Thatcher. MORI wasn’t polling at this stage in her leadership but in March 1977 the firm had her at 36% satisfied to 51% dissatisfied – which is a higher negative than Miliband is currently experiencing.

As I recall Mrs. T was not “sunk without trace”.

The chart above shows the MORI leadership ratings at nine or ten months in for all leaders of the opposition since 1979.

If you look just at the “satisfied” figures in the chart Miliband is doing relatively well. With a 34% positive he’s ahead of all the Conservatives in the list including David Cameron.

Where it falls down for Ed is with the “dissatisifed” ratings. Here his current 48% is exceeded only by the hapless Michael Foot.

The question is which numbers matter most or should we just net it off as Curtice does in the Indy report?

My view is that the positive figure is the most important.