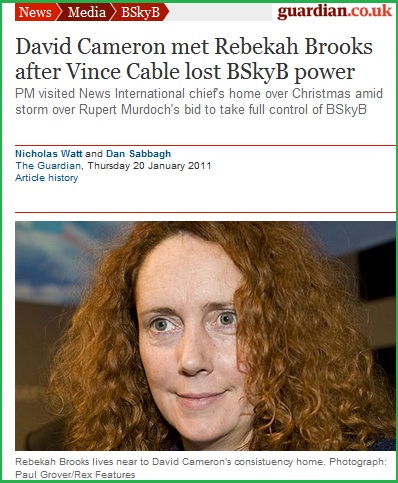 Have the politics of phone hacking changed?

The Speccie’s James Forsyth has got a good take on the hacking affair on the Coffee House blog following the revelations about the Milly Dowler case.

He writes:“The politics of the phone hacking saga have changed dramatically in the last 24 hours. Up to now, it has been a scandal that has been of huge interest in political and media circles but hasnâ€™t cut through to the public.

But that could all be about to change with the allegation that Milly Dowlerâ€™s phone was hacked after she was abducted and voice mails deleted (it should, obviously, be noted that nothing has been proven in a court of law on this point yet). If this allegation is true, it shows just how out of control and unrestrained the culture of phone hacking was.”

An embarrassing factor for Number 10 has been the apparently close relationship which his family appear to have with Rebekah Brooks, CEO of News International, who is one of his constituents. That, as was revealed in January, the Camerons accepted an invitation from Brooks over the Christmas holiday has already caused a fuss.

This, of course, took place while Rupert Murdoch’s bid to take full control of BSkyB was being considered by ministers.

My guess is that the PM will be pressed on his personal linkages as well as the policy issues at tomorrow’s PMQs. He needs to respond in a quiet restrained manner – the “Flashman” approach will only make things worse.