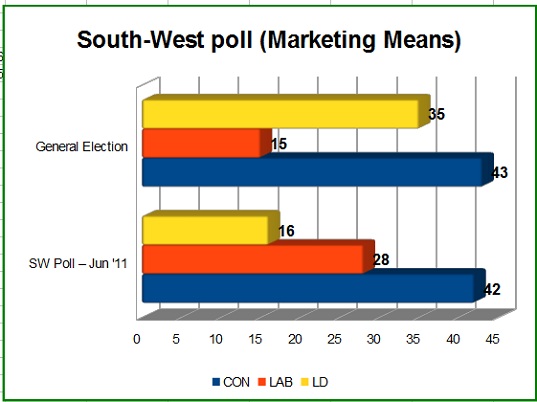 But will incumbency keep the losses down?

There’s a poll out today from Marketing Means which has appalling news for Nick Clegg’s party about the state of opinion in one of their strong-holds, the SW of England.

According to the hybrid phone/online poll the Tories are down one to 42%, Labour up 13 to 28% with the Lib Dem down from 35% in the region at the general election to just 16% now.

On the face of it this would see a near wipe-out for the party in the region with YouGov’s Anthony Wells calculating that they’d only have two seats left – Yeovil and Bath.

My guess is the incumbency effect for sitting MPs and considerably better organisation and support in seats that are being defended would stem some of the losses if an election was to take place now.

As the leading Tory analyst, Rob Hayward, told ConHome readers last month – “Be under no illusions even in what will probably be the LDsâ€™ darkest days they could still defend their bastions very effectively.â€œ

One of those bastions is Torbay where the week before last they took a Tory council seat on a swing of more than 10%.