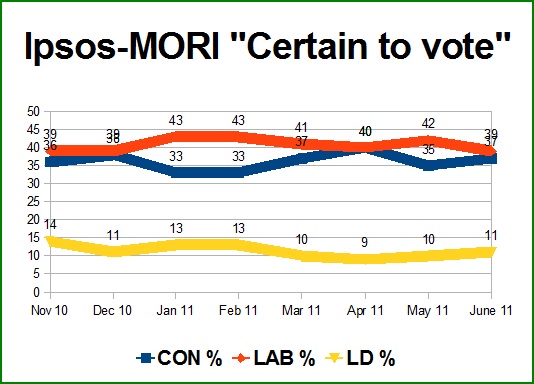 The June political monitor by Ipsos-MORI for Reuters is out and has both coalition partners moving up at the expense of Labour who are now back in the 30s for the first time from the firm since last December.

Labour are down three at 39 with with the Tories up two at 37 and the LDs up one at 11. The shares are almost identical to the ICM poll that was published on Monday night.

This means that all the pollsters, bar YouGov, now have Labour with a maximum lead of just two points. Last night YouGov’s daily poll reported a Labour lead of six points with figures of 42/36/9.

YouGov is the only firm using newspaper readership weightings which can create sampling issues.

Last month MORI became the top pollster at the Scottish election and was joint top at the general election alongside ICM and Populus.

We have not yet got the key leader satisfaction ratings from the pollster – I expect they’ll be published in the next few hours. I’ll be covering that and the other issues in the poll when we have the full information available.