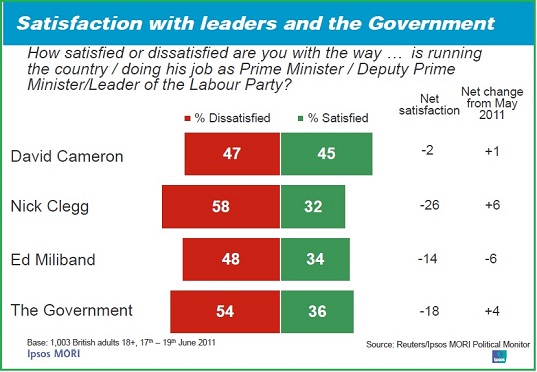 And shouldn’t Ed being faring better amongst ex-LDs?

As well as this morning’s voting intention figures we now have details of the pollster’s leadership ratings which have been asked in the same form for nearly a third of a century.

As can be seen Cameron is almost at a standstill, Clegg sees an upturn from the previous seriously poor figures and Ed Miliband continues to struggle.

In spite of Labour benefitting more than the Tories in the fall of LD support since the election; Cameron’s approval ratings among those who voted LibDem in 2010 are higher than for the other two leaders â€“ Cameron is on â€“15 and both Miliband and Clegg on â€“28.

Could this mean that Labour’s progress in attracting former LibDem voters in VI polls shouldn’t be taken as guaranteed support in the ballot box, especially so long as Cameron is (relatively) more popular.

As to their views of their own leaders these are the party splits:-

In other findingsÂ  Labour has extended its lead over the Conservatives as having the best policies on healthcare. The reds have always led on this issue, and the latest data shows the best position for the party for almost ten years. Â However, it is nowhere near the dominance that Labour had on the NHS during the 1990s.

The Lib Dems get a higher figure on having the best policies on health than those who say they’ll vote for them.