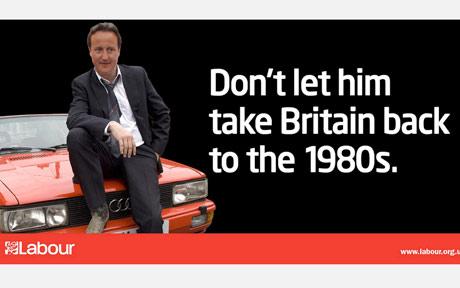 A guest slot by CycleFree

According to the weekendâ€™s papers, Ed Milliband is going to argue that his â€œPromise for Britainâ€ means that â€œbankers and those on welfare need to have a sense of responsibility to their communities.â€

All fine â€“ as far as it goes â€“ but the feebleness of what is expected is striking. At a time when we are living through one of the worst crises in capitalism in decades (not yet over and which may indeed have a second round if countries in the Euro-zone default), why is the critique of the excesses of the financial system and wasteful State spending so weak and trivialised (â€œbankersâ€™ bonusesâ€ and â€œdiversity officersâ€ being about the limit of debate)? Why are the parties so shy at articulating a clear way forward (beyond the need to deal with the deficit)?

Parties find it easier to win when they set the terms of the argument. Which party will be most successful in doing this at a time of relative austerity?

The main three are, to a greater or lesser extent, still framing the debate using mantras from the 80â€™s and the last decade as comfort blankets without looking at the issues afresh.

â€œPublic servicesâ€, â€œspending/investmentâ€ (take your pick), â€œcompetitionâ€, â€œprivatizationâ€ may have been the answers before. It does not necessarily mean they are the answers now or, at least, not in the same form. The Archbishop of Canterburyâ€™s comment that the Big Society is seen as a cover for cuts gets it precisely the wrong way round. Itâ€™s because there is no money left and wonâ€™t be any again for a while, especially if we donâ€™t develop an economy based on something more than City froth and shopping, that we need a debate about what kind of society we should be.

Take the financial system: arguably it is as over-mighty, over-large, arrogant and harmful to the countryâ€™s long-term needs as were the unions of the 70â€™s and 80â€s. It seeks to blackmail governments if they try to control it; it is inefficient even at what it is meant to do (see the persistent and periodic complaints about underwriting fees or by SMEs seeking finance for business development & expansion), is especially poor at providing worthwhile long-term retails savings and insurance products (a particular problem for us all given the strains on public finances, greater longevity and, of necessity, more self-reliance) and has a tin ear for the public mood when dealing with the almost inevitable complaints. We need an effective financial system, not primarily for large tax revenues to finance public spending and to come up with too clever for their own good wheezes such as PFI (the Labour view) but because no economy can work well without one. But success needs to be defined by those who use it and need it.

On public services, Labour seems to have forgotten they are there to serve the public. Education and health were nationalized because this was the best way at the time to provide what was needed. But nationalization is a means not an end in itself, something rather forgotten in the overly hysterical debate on the NHS and changes to the welfare system. Labour needs to place itself on the side of those using the services, even if this means upsetting those who work in them. It needs to realize that being seen on the side of â€œthose ripping off societyâ€ is the quickest route to irrelevance. None of this would be surprising to the Labour party of 60 years ago. But is Labour now too beholden to the unions and public sector workers and the all-providing State to be on the side of the public?

The Tories â€“ other than in education and welfare â€“ are prone to talk about competition as the solution without asking themselves (let alone persuading us) what mischief they are trying to address and whether this solution will improve services for us. They need to have the courage to give us a positive account of the society they are trying to achieve, put themselves on the side of the people and not be seen just as the party brought in, reluctantly, to sort out Labourâ€™s economic mess.

And the Lib Dems? They need to concentrate on what they have achieved (lowering tax for the lower paid / rolling back Labourâ€™s authoritarian measures) not hyper-ventilating about being in power and boring on about arcane constitutional issues of no interest to people wondering how to pay a 19% increase in their fuel bills.

Which party will win the battle of ideas? And do these ideas matter?