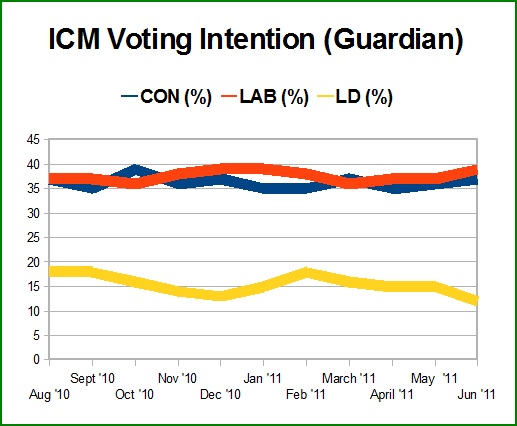 But EdM’s personal ratings are worse than Clegg’s

The first ICM political poll to be published for seven weeks is just out in the Guardian and puts the Lib Dems on just 12% – the lowest from the firm for fourteen years. The Tories are on 37% with Labour on 39%.

This will come as a bitter blow the Clegg and his team because ICM is traditionally the pollster that has given them the highest ratings. It very much mirrors the drop from Populus last week.

But there’s grim news for Labour with yet another pollster reporting seriously bad leadership ratings for Ed Miliband.

Cameron is now in negative territory for the first time.

A particular feature is that the Labour leader is notably unpopular among older voters and men.

Julian Glover writes: “His popularity ratings now resemble those of Iain Duncan Smith, whose net negative rating in ICM polls averaged around -20 when he was leader of the opposition. His rating is notably worse than those of either William Hague or Michael Howard as opposition leaders.”

There’s comfort for both coalition partners on the economy with 40% think that its policies are best, only 28% say Labour. Men are much keener on the coalition’s economics than women.