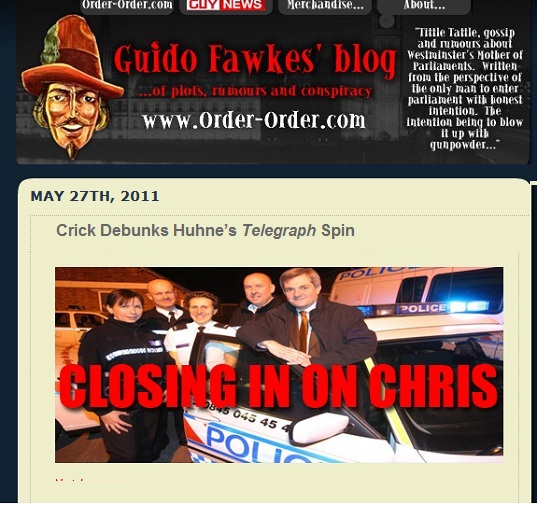 Is Huhne going to “be toast” or not?

The first big Chris Huhne market, whether the LD energy secretary will still have his cabinet place by the end of the month, will be resolved at midnight and unless there’s something dramatic during the day it’s hard now to see those who gambled that he’d be out winning. On top of that there’s been the betting on which minster will be next out of the cabinet which has fluctuated harply.

A lot of this has been driven by the dozens of posts on Guido’s with a key source, as above, being the political editor of Newsnight Michael Crick.

The BBC man’s last postings were on Friday night and touched on one key issue could be central to Huhne’s future – the extent to which the energy secretary’s estranged wife co-operate with the police.

Crick reported then “Contrary to a report on the front page of today’s Daily Telegraph, Chris Huhne’s estranged wife Vicky Pryce is co-operating with Essex police, according to a reliable source.

Essex police this week interviewed both the energy secretary and Vicky Pryce over allegations that Huhne got his wife to take the points for a speeding offence on the M11 in March 2003.

Under the headline “Huhne’s ex-wife refuses to confirm points claim”, the Telegraph today said Pryce had refused to tell the police in her interview whether or not she took points for the offence.

I hear that Vicky Pryce is “irritated” by the Telegraph report, and that “it’s rubbish that she’s not co-operating.”

At the heart of this is whether there’s evidence to prove “beyond reasonable doubt” that Huhne did as is alleged eight years ago. If the main evidence available to prosecutors is the time at which his wife left a dinner in London on the night in question in 2003 then it’s harder seeing how a case could succeed.

If the Crick version of the police interview is correct then Huhne’s future looks less secure.