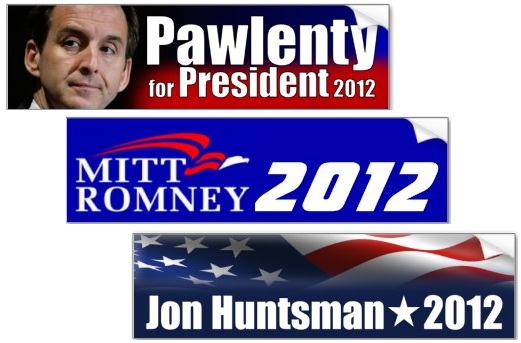 So in November 2008 less than a fortnight after Obama’s victory I placed Â£50 with Ladbrokes at 200/1 against Jon Huntsman being the next president. When he accepted the post of ambassador to China from President Obama two and a half years ago that looked like wasted money. But Huntsman stood down at the end of April and is now doing everything you would expect of a potential candidate.

In the past couple of weeks one Republican contender after another has stood aside and now the fight looks as though it’s down to three men – with a question mark still hanging over Sarah Palin. These are the current Betfair prices both for the nomination and the White House.

The polling at this stage is very much down to name recognition which is why Romney, who tried in 2008, appears to be doing better. Pawlenty, the governor of Minnesota and Huntsman are much less well-known.

My reading is that even if she does put her hat into the ring Sarah Palin has a massive job on her hands. She has an enthusiastic band of supporters but the party’s priority will be on choosing someone who has a chance to unseat Obama and I don’t think that will be her.

Romney’s challenges are that he lost out to McCain in 2008 and he’s now approaching his mid-60s. The party, surely, will be looking for someone of Obama’s generation.

So I think it’s between Pawlenty and Huntsman. I’ve been hugely impressed by the former and have started betting on him. I’m more than well covered on Huntsman who, like Romney, is a Mormon.

Whatever this is going to be the big political betting story of the next eighteen months and I’m determined to be a winner again.

A BIG THANK YOU to all of those who have made donations to the appeal to keep the site going and to provide a facility to support Marf's work. This is only the third time in seven years that PBers have been asked for help and it really is very pleasing that once again those who value the site are being generous.