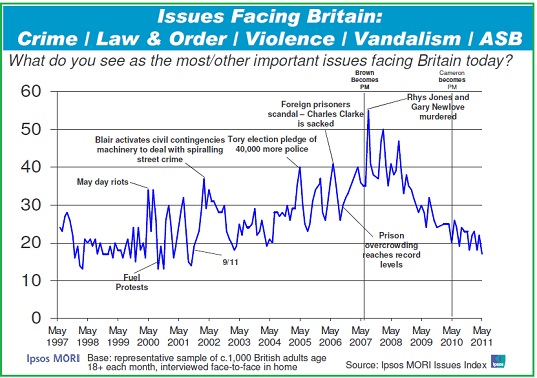 Would the MORI method have produced a different picture?

Much has been made in the past week of Michael Ashcroft’s massive poll in which he sought to identify the issues that the Tories need to focus upon if they are to win a majority.

He highlighted two policy strands: – the NHS and crime/law and order and it’s on the latter that there’s been much focus in recent days with the strong suggestion being that being “tough” is the way to get more votes.

But would Ashcroft have come up with very different findings if he’d followed the Ipsos-MORI method of identifying the key issues that people are concerned about?

For, as is often highlighted in PB, the MORI approach involves interviewing people face to face and asks, entirely unprompted, what they thing is the key issue facing the country. Then a second question is put asking for other issues that are causing concern.

Here you get a very different picture. Look at the MORI chart above and see how the trend about concerns on crime is in fact declining at quite a rate. In this month’s polling just one in six mentioned it.

There is a vast gulf between inviting people to tick boxes on an internet questionnaire and asking them in a quiet conversational manner to name the issues that think are the greatest concerns. My view is that the latter is far more valuable.

The MORI method has been used almost every month for nearly a third of a century and there are records going back all that time.

Crime is a concern to a significant segment of the population – but is it on anything like the scale that the Ashcroft polling suggests? This is a big question because the blues might change their stance in a way that doesn’t produced the hoped for electoral gains.