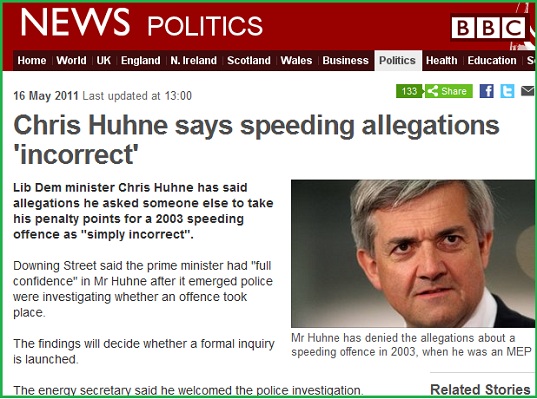 And Cameron backs his energy secretary

The Lib Dem energy secretary, Chris Huhne, has done a BBC interview in which he states categorically that the allegations he asked someone else to take his penalty points for a 2003 speeding offence are “simply incorrect”.

No doubt there’ll be a lot of reading between the lines of his statement but it’s hard to see where the story goes from here without any evidence.

Ladbrokes report that the money this morning has been going on Huhne still being in the cabinet at the start of June and the price against him going earlier has moved out from 5/4 to 6/4.

Meanwhile Number 10 has said that the Prime Minister has “full confidence” in Chris Huhne and points out that the energy secretary has denied the claims.

Signiificantly when asked if Huhne could stay in the Cabinet if the police do formally investigate him, the spokesman said: “It has happened in the past.”

My reading in these cases is that there’s a massive difference in a police investigation being under way and a decision to prosecute – after all several cabinet ministers, including Blair, were investigated over “cash for honours”.