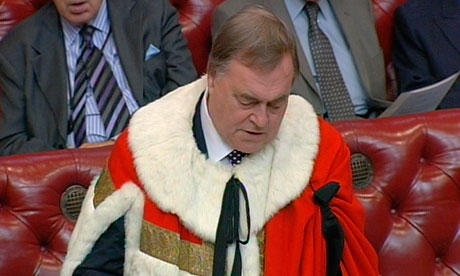 Should they have pushed for House of Lords reform instead?

The comprehensive defeat for the Yes2AV campaign has caused much questioning from those who proposed the change: how could the campaign have been better fought? Was it on the wrong day? Was it too narrow in scope? How could the assertions from No have been better rebutted? – and so on. One question that does not seem to have been asked is the most fundamental of all: was it the right priority for political reformers? So letâ€™s ask it.

At the time, the inclusion of a referendum on AV was seen as the big win for the Lib Dems in the Coalition Agreement and certainly played a major part in there even being a coalition agreement rather than a confidence and supply arrangement.

A year down the line and that â€˜big winâ€™ is worth less than nothing to reformers. Not only will there be no change in the voting system this parliament but the scale of the defeat has also probably closed down the prospect of such a change for the foreseeable future. By contrast, the equalisation in the size of parliamentary constituencies will be banked unless there is an early election.

Could the Lib Dems have pushed for an equally bankable reform? Doing so would have meant dropping the insistence on voting reform but as PR – the true prize – was never on offer, might Clegg have been able to sell a different route to that goal to his party, other than the AV referendum? House of Lords reform may have offered that opportunity.

to establish a committee to bring forward proposals for a wholly or mainly elected upper chamber on the basis of proportional representation. â€¦ In the interim [before any reform is enacted], Lords appointments will be made with the objective of creating a second chamber reflective of the [2010] share of the vote â€¦

This is no specific commitment to legislate. If the AV referendum hadnâ€™t been pushed for so strongly (or indeed, at all), it would have freed up political capital to prioritise reform of the Lords, namely an upper chamber elected by PR.

Why would this have benefited the Lib Dems? It would have embedded PR into national parliamentary elections; it would ensure at least one chamber of parliament would be â€˜hungâ€™, increasing Lib Dem influence and reducing the risk of over-mighty government; and an elected second chamber wouldÂ have greater legitimacy than the current Lords, creating a strong case to increase its powers e.g. by reverting to the provisions of the 1911 Parliament Act rather than the 1949 Act.

Was such a deal deliverable? Very probably it was. The Agreement quoted above approves of both the principles of reform and election (or appointment) by PR. The distance from establishing a committee with the intention of reform to enacting reform on the same basis is a small one. However, the referendum has knocked the wind out of the reformersâ€™ sails. Without a firm commitment in the Agreement to fall back on, it may well fall victim to legislative inertia – unless there is some sufficiently large quid pro quo that could be offered the other way.