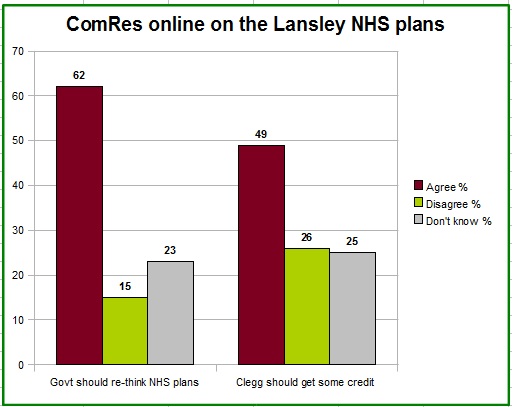 There’s a new ComRes online poll just out for the Indy on Sunday and the Sunday Mirror. It’s headline figures follow other recent polls and show that Labour’s lead is narrowing. These are the figures with comparisons on the last ComRes online poll:-

Amongst the non-VI findings there are some worrying numbers for the blue team on the Lansley NHS changes as shown in the chart above. To the question “The Government must rethink its plans to hand over most spending decisions in the NHS to GPs/family doctors” the split was Agree: 62% Disagree: 15%.

A second question will bring some comfort to the yellows. The sample split Agree: 49% Disagree: 26% to “Nick Clegg deserves some credit for making the Conservatives think again about their NHS changes.”

Other findings in the polls were:-

In most cases I have sympathy for people going on strike against public spending cuts.

A big party split here: 71% of Labour voters agree, compared with 41% of Lib Dem voters and 24% of Conservatives.

The use of so-called super-injunctions against the press shows that there is one law for the rich and one for the rest.

Scotland should be an independent country.

It would be appropriate for Baroness Thatcher to receive a state funeral after her death.

Now that Osama bin Laden has been killed, there is no need for British troops in Afghanistan.