You have either got â€œitâ€ or you havenâ€™t

Is it possible for you to put yourself in the place of an ordinary voter without a particularly strong party allegiance one way or the other? Imagine you catch a glimpse of these two first time on video. Unfortunately the sound is turned down. 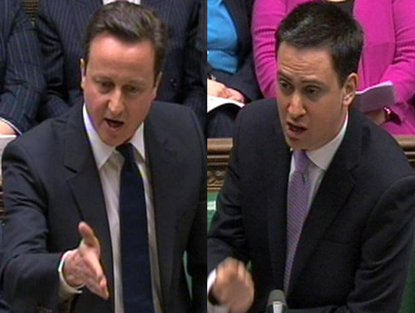 Which of these two do you think would make the best Prime Minister?

There, you now know which of the two main parties will come out on top at the next election. Why, because 2 seconds is all you need to decide whether someone would be good in a particular job and because, if that judgement is shared by other ordinary voters, the outcome of the next election is already clear.

You have just repeated an experiment conducted by Professor Nalini Ambardy among new college undergaduates. She showed new students silent video clips of college lecturers and asked them to rate their effectiveness. She started with 10 second clips then shortened the length to 5 seconds, then to 2 seconds and found the ratings were the same. And those scores were remarkably similar to the ratings given by students who had been taught by those same lecturers for six months.

This is one of many examples contained in Malcolm Gladwellâ€™s book, â€˜Blinkâ€™, illustrating that initial impressions are valuable, and are often far more reliable and accurate than we are taught to believe.

In focus groups, ordinary swing voters often feel confident to judge aspiring Prime Ministers on the basis of their initial impressions and few waver. To ordinary voters, each candidate has either got â€œitâ€ or he/she hasnâ€™t. Ambardy and Gladwell would say those instant verdicts are precious, because far more often than not they are likely to be right.

Focus group respondents said at the time that John Major didnâ€™t really have â€œitâ€ but he was saved by the fact that he had more of â€œitâ€ than Neil Kinnock. William Hague didnâ€™t have â€œitâ€, Duncan-Smith didnâ€™t have â€œitâ€ and Michael Howard didnâ€™t have â€œitâ€ either. It wasnâ€™t that people didnâ€™t like them (though some obviously didnâ€™t), they just could not see them as effective Prime Ministers. Almost all focus group members found it easy to make up their minds about these leaders, often on the basis of the briefest consideration. Like producers in a casting set they needed only a few words, a cursory glance at each face to decide, yes or no.

For sure, the outcome of each election hinges on more than just the leader, but the last time a party won despite its leader was 1979, when the Conservatives beat Labour despite Margaret Thatcher being thought of as a less capable Prime Minister than James Callaghan.

In the intervening years the ideological gap between Labour and the Conservatives has narrowed considerably. People have (perhaps as a consequence) less time for real politics and rely increasingly on impressions of the leaders as people, asking themselves whether the leaders are likely to empathise with their concerns and aspirations; tackle problems as they would; be decisive; do something useful. For that judgement, come the next election, many of them will simply look the leaders in the eyes.

Nick Sparrow was head of polling at ICM