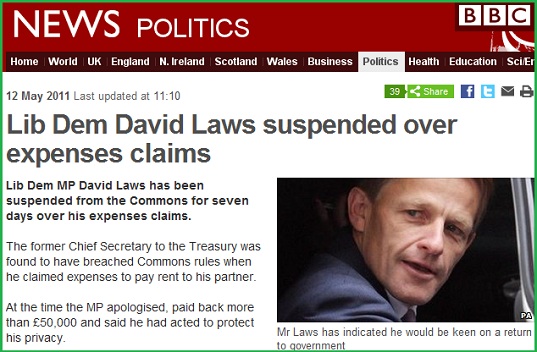 After all the speculation we now have the ruling on David Laws – the Lib Dem cabinet minsters who lasted just 17 days last May after the Telegraph made allegation about his expense claims.

The report accepts that his motivation was to protect his privacy but goes on to say that “Whatever his motives and subsequent behaviour, Mr Laws was guilty of a series series of breaches of the rules”.

He’ll be suspended from the Commons for seven days.

Cameron has made it clear that he’s hoping that Laws will return as a minister though it’s a hard to see that happening in the immediate future.

I liked the idea being floated yesterday of him resigning his Yeovil seat and fighting a by-election. It would certainly clear the air if he was re-elected in such circumstances.