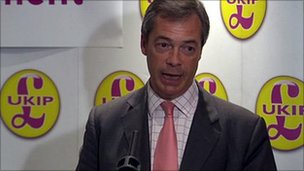 Why didn’t his party pick up any more councillors?

There’ve been calls during the day for Nigel Farage to step down as UKIP leader following his party’s dismal performance last Thursday.

After the strong showing in the Barnsley by-election and putting up nearly thirteen hundred candidates in last week’s local elections the party saw no return for all its efforts.

The key UKIP figure, former EU Chief Accountant Marta Andreasen, has said that it’s time for the leader, who was only re-elected last year, to step aside.

She said: “Party members and supporters are justifiably angry. After promises of success and claims that the party would triple the number of its seats, after large amounts of party members’ and donors’ money was spent on what was a poorly led campaign, the result was frankly dismal.

“I am calling on him to step down as Leader of UKIP and make room for a new Leader who resonates more with the public and who will move us forward to where I know we should be. It is time for change. Mr Farage has abjectly failed to deliver and is not leading the party on the course to victory. Even he must recognise this fact.”

The problem for UKIP is that they have no real expertise in the form of campaigning that produces council seats. – all the grunt work making contact with voters, the regular distribution of leaflets and an effective polling day operation that gets supporters out to vote. The party has always focussed on bill-boards and other outdoor advertising – which is simply inadequate in local elections.

Will Farage go? Hard to say but I thought the party made a mistake restoring him to the job after his dismal performance against John Bercow at the general election in Buckingham.

My choice would be the party’s Scottish leader – Viscount Christopher Monckton who is a superb communicator.