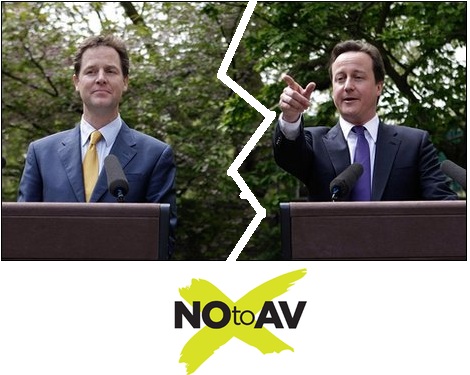 Is this now the beginning of the end?

As James Forsyth of the Speccie is reporting the coalition “has been shaken to its foundation” by Lib Dem fury at the way the Tory-funded NO2AV campaign is going about its task.

A particular beef is that NO campaign is making its main object of attacks the leader of its coalition partner who is being vilified for supporting coalition policies?

Also the level of Cameron’s involvement in the NO effort goes back on undertakings he gave publicly and privately to Clegg at the start of the campaign.

The real danger is the damage this might have done to the personal relationship between the two men. Once trust has broken it’s going to be very hard to get it back.

A key element in all of this is what happens in the May 5th local elections – and the word I’m getting from all three main parties is that the yellow vote, particularly in LD-CON contests, is more resilient than it might have looked a month ago. Nick Palmer was reporting as much yesterday.

If there’s less chance of being annihilated in a general election then there’s less risk in rocking the boat.

A by-product of the public bickering between the partners is the message it sends out to Labour voters who have traditionally voted Lib Dem where their party has no chance. The view was that those votes had gone. Maybe that won’t happen to the same extent.

Cameron’s problem, of course, was the need to pacify his right wing. A YES victory could have made his position more difficult.