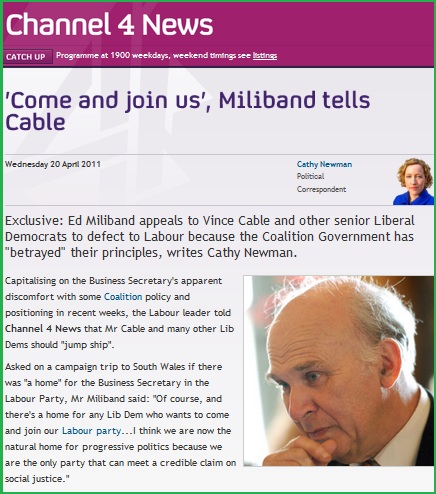 Why would Vince give up his cabinet job?

Channel 4 news is making a splash tonight over comments made on a train by Ed Miliband in which the Labour leader appealed to Cable and other LDs to join Labour.

The fact that this appeal has been made publicly means that there’s nothing in it. Genuine defections come about after secret talks and the first thing you hear is that the move has been made.

In any case what’s in it for Cable? Labour looks set to be in opposition for at least another four years and he’s a cabinet minister.

I suppose there’s some merit in it as part of a de-stableisation strategy but you can look a bit foolish when the appeal is rebuffed. A