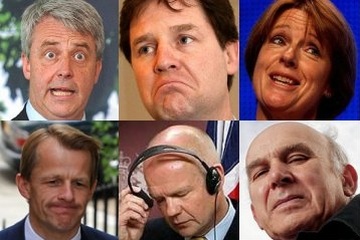 Who’s going to get moved and when?

Next month weâ€™re likely to have the Coalitionâ€™s first reshuffle. Whatever happens, the Coalition will break new ground. David Cameron will have to walk a tightrope between the two parties. Can he refresh his tired team and maintain the Coalitionâ€™s equilibrium. Here are six candidates who might move: Cable, Hague, Clegg, Laws, Spelman and Lansley. All have had an â€œinterestingâ€ year. How many could be in a new job by the recess? How radical can Cameron be and could a bit of lateral thinking go a long way?

Among the Tories, Andrew Lansley has had the worst of it. At 3/1 he is the Ladbrokes favourite to leave the cabinet next. Both his presentation and execution of the NHS reforms have been questioned. He has placed the government in avoidable danger. For that reason and the fact he is hardly irreplaceable, he has to be on dodgy ground. Cameron is not short of candidates for Health Secretary, but there is an intriguing opportunity.

If Cameron is radical, could David Laws be the man to sell NHS reform? Bringing him back, Peter Mandleson style, has always been on the cards. It would be a gamble, but it could be worth the risk. Laws has the Coalition in his DNA (a blue-yellow double helix). Senior figures on both sides seem to trust him. Being nominally in charge of the NHS would cheer the Lib Dem troops and could, post AV, fill in the blank space on Focus leaflets. I doubt chief strategist George Osborne would mind if his Coalition partners carried a greater share of the political risk.

Going further, could we see a straight swap between Clegg and Hague? Apparently they do not enjoy their current roles. A swap could solve both their problems. Could anything cheer up miserable Nick Clegg better than a stint at the foreign office? He would lap up the prestige, is a natural for Euro politics and could use the opportunity to brush up his CV. And with Laws back in London, he wouldnâ€™t have to personally manage his troops.

In the meantime, William Hague is already Cameronâ€™s deputy in the Tory party. Why not take the same job in government? As the cuts put the coalition under pressure, Hague could be quite effective as Cameronâ€™s â€œWillieâ€. Is anyone better placed to keep the Tory MPs on side? He would probably enjoy the freedom of an elder statesman role.

So who is on the way out? The big question is whether Vince Cable (4/1) is immortal. So far he has survived two fatal wounds. He stayed after he stabbed himself during the embarrassing Murdoch expose. And more remarkably he recently survived intact a direct assault on the PM. In any other government, Cable would have been toast. It will be interesting to see if Super Vince survives again. Is No10 afraid to have him outside the tent? Meanwhile sadly for her, Caroline Spelman (8/1) is nowhere near as dangerous.