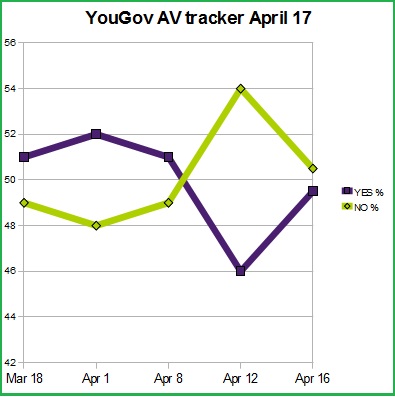 Are YES voters more likely to turn out?

With just two and a half weeks to go before the series of elections on May 5th there are polls galore at the moment.

YouGov’s latest AV tracker, for the Sunday Times, is out and sees a sharp reversal on what the online pollster found on Tuesday in the immediate aftermath of NO’s first election broadcast.

On the face of it the YouGov finding is very different from what ComRes reported last night. In fact the figures before turnout weighting were almost the same with both pollsters.

The difference being that YouGov weighted by likely turnout at the May 5th referendum – ComRes, for reasons that I cannot fathom, applied their Westminster voting intention likelihood to vote figures.

What this latest poll is showing is that YES supporters are more likely to vote – hence the closing of the gap. Turnout is going to be critical which is why this election is so hard to call.

As we’ve come to expect in YouGov AV polls the place where YES is most popular is Scotland. The oldies, those aged 60 and over, were most opposed and they, of course, are most likely to vote.

Tomorrow evening we should see the first phone poll on AV for nearly two months. ICM is out for the Guardian. Later in the week we will see Ipsos-MORI.

So just when it looked as though NO was getting the edge this latest finding from YouGov puts the race in question.

Me – I’m not betting until it becomes clearer. Almost all my May 5th gambles have been on the SNP in Scotland and that’s looking pretty good – see previous thread.