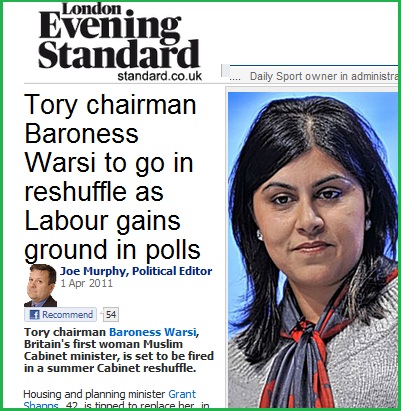 Joe Murphy in tonight’s Standard is saying that Tory chairman, Baroness Warsi, is set to get the boot in a post-May 5th cabinet re-shuffle. He’s tipping Grant Shapps to replace her.

Also on Murphy’s danger list is Caroline Spelman who came to the forefront a month or so ago with the forestry sell-off row.

I don’t know how strong Murphy’s information is but it seems likely that Cameron will want a re-shuffle after the May 5th elections – and Spelman and Warsi would seem possible candidates for the axe.

Both are runners in the Ladbrokes “next cabinet minister out” market. Warsi’s at 12/1 and Spelman at 16/1.

If several cabinet ministers go on the same day then the Ladbrokes’ dead heat rules would apply – so you would get a return though not of the full amount. I’ve had a little wager on both Warsi and Spelman.

Smarkets also have a next cabinet exit market but its rules state that if there’s more than one exit on the same day then the market is void and all stakes are returned.