How PAPA has moved since the election 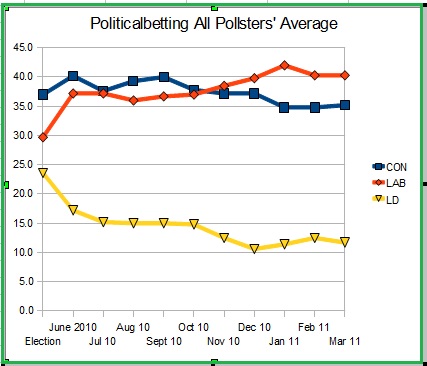 Ever since PAPA – the Politicalbetting All Pollsters’ Average – was introduced last autumn people have suggested that I should produce regular updates and charts so we can plot the trends.

I have finally got round to it and plan to update the chart at the end of each month.

PAPA is calculated by taking the average shares for the three main parties from the latest poll of from each of the polling firms in the preceding month.

Unlike the UKPolling Report average, produced by Anthony Wells of YouGov, PAPA does not discriminate for or against any pollster and only includes the latest survey from each of the firms. The aim is to recalculate it as each new poll comes out or as old polls drop out after passing the month-old point.

As can be seen Labour reached a high point in January and have edged a touch back since then. The Lib Dems dropped to a low in December after the fees issue but have recovered a notch. The Tory share has been pretty stable since December.

NOTE: I’m not very experienced at producing charts and if any PBer can create a template that’s better than what’s above I’d be delighted to consider it.