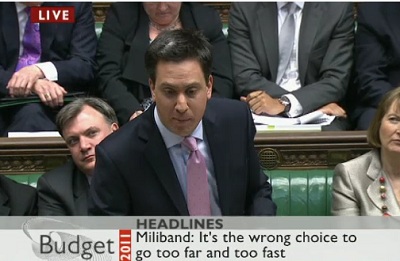 The news that apparently the Labour leader wants to be known as Edward Miliband in future has been treated with widespread guffaws – as you’d expect.

No doubt we’ll see all sorts of pop psychology in the media over the next twenty four hours as so called “experts” pronounce on his motivation and whether it will have an impact.

This, together with the reports that he’s planning to marry his long-standing partner and the mother of his two children, suggests that Miliband Towers is having a serious re-think on how their man should be projected.

What we are talking about is a renewal of a brand and Labour strategists clearly think that the sooner this takes place the better. I think that they are right. They might take a short term minor hit but “Edward Miliband” does come over better.

It also starts to deal with his youthfulness and my guess is that we’ll seem some other more subtle efforts to develop his persona into a serious candidate to be the next prime minister.

For me the big presentation issue that Edward has got is his voice. It’s just too nasal and it makes him sound like he’s whining all the time. My guess is that this will be worked upon as well as part of a major make-over.

I wonder whether the changes are in response to what’s been coming over at focus groups? How someone appears and sounds can often be more important than the substance of what they are saying. Remember the response just over a year ago to the first TV debates – so much related to perceptions of how the three leaders looked.