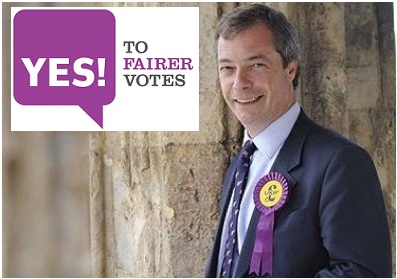 Is UKIP felt to be not quite respectable?

Last month UKIP decided that it should campaign for a YES result in the May 5th referendum.

In a statement the party said:“.. we recognise that AV does enable all voters to register their first preference vote with the candidate of their conscience, and so demolishes the â€˜wasted voteâ€™ issue. Under AV, UKIP could potentially achieve a much higher share of the vote through â€˜honestâ€™ first preferences.”

I’m sure that’s a correct reading – UKIP which first made a breakthrough when EU parliament elections in the UK moved to the regional list system would also do well with this change at parliamentary elections. Whether they’d win any seats in another matter – but they’d certainly do better than the 3.1% they achieved last May.

Then many potential supporters were put off by the paramount need, as they saw it, to stop Labour and that normally meant voting Tory.

With polling showing that the segment of electors most hostile to change are Tory traditionalists why isn’t the YES campaign making more of UKIP’s and Farage’s commitment? If properly handled this, surely, could help them get to a hard-to-reach group of voters.

There may, indeed, be plans but just looking at the YES campaign website and you’d be hard-pressed to find any reference to UKIP’s decision. After an extensive site search I found just one mention – and that was tucked down towards the end of a blog entry.

I’ve been trying to get an answer from YES about a possible Farage involvement but so far without success.

With the polling showing this being almost a 50-50 election and indications that there’ll be a very low turnout then both sides, surely, need to be doing everything maximise their appeal.