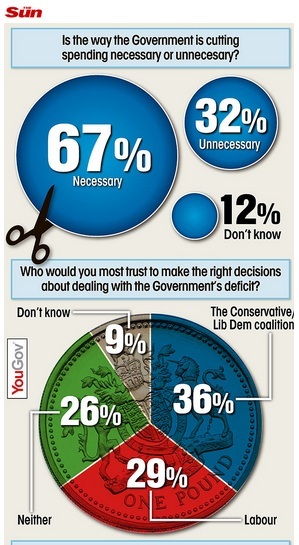 Labour’s ratings on the economy slip back

The first voting intention survey since the budget, the Sun/YouGov had CON 37: LAB 41: LD 11 – the best figure for the blues s since February and equalling the best for the yellows. The gap was down to four points.

In other questions there’s also good news for both Osborne personally and the coalition government generally.

The survey found that 38% of those sampled trust the coalition on the economy, up two points since the speech. Labour’s rating was down sharply from 29% to 24%.

Osborne’s personal rating moved from 27% before the budget to 34% last night.

To a question on the need for the cuts 59% said they through they were necessary compared with 31% saying they are unnecessary.

A total of 44% of the sample thought that Osborne’s measures were “fair” compared with 31% who thought they weren’t.

The big question, of course, is how this will look next month or next year for that matter. There has been a record of budgets getting an initial good public reaction only to be seen later as bad for the government.

NOTE: The post has been updated to take account of the numbers in the actual data – not that on the Sun’s grpahic.