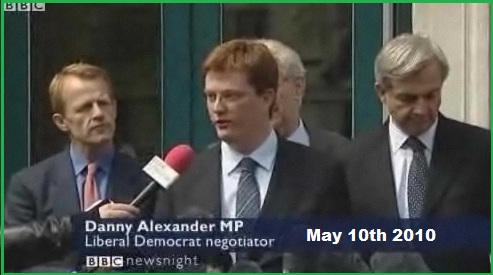 Did the blues make the wrong call last May?

On the previous thread Laptop posed the question of whether, in the light of what’s happened over the past ten months, the Tories would have been better going for a “supply & confidence” arrangement with the Lib Dems rather than full coalition?

Certainly looking at the way the polls and and Barnsley have gone things look bleak for the yellows as they face the May 5th English locals and the devolved parliament elections in Scotland and Wales.

A better question, surely, is whether Cameron should have settled for “Supply & Confidence” with the prospect of an overall majority in a fresh election a few months later? Maybe it was the Tory leadership that made the mistake?

For if the AV referendum produces a YES then every minute detail of those few days last May will be put under scrutiny and you can see significant sections of the party saying that Cameron got this wrong.

The yellows had three choices on May 7 2010 – to provide a â€œsupply and confidenceâ€ undertaking to Cameron, go for full coalition with the Tories or try to cobble together a so-called rainbow coalition with Labour, PC, the SNP and some NI MPs.

The latter, I’d suggest, was never an option because of the mathematics and the hostility of key Labour players such as Ed Balls.

A “supply & confidence” would have led, almost certainly, to an October 2010 general election which, like Labour, the Lib Dems simply did not have the resources to fight. A blue majority would have been highly likely.

Also details of the Tory offer of five cabinet places, the policy compromises and the AV referendum would have leaked out and the Lib Dem would have looked like a party that was never going to be interested in power. I don’t think that Clegg & co had any real choice.

Cameron and his team did. Without the offer of the referendum the yellows would have refused a coalition and we’d have seen a supply and confidence arrangement for a few months. Then in a new election the Tories, surely, would have been the unequivocal victors.