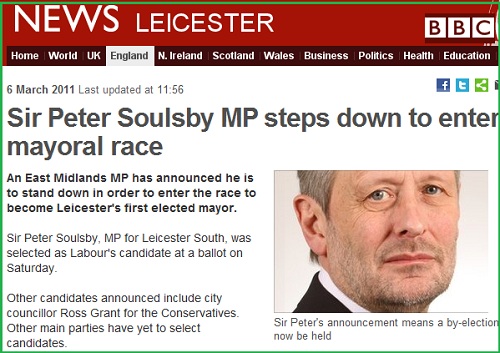 Will these be the big English battles on May 5th

One development that hasn’t been given much attention is the decision by Sir Peter Soulsby to resign his seat of Leicester South following his selection as Labour candidate in May’s first election for the Mayor of Leicester.

What focus there has been on this has been on the parliamentary by-election – but isn’t his decision to abandon Westminster more interesting?

For these elected mayor positions, which only exist in thirteen different English authorities, are part of a completely different form of local government because so much executive authority is given to the post-holder. At the same time the role of councillors is considerably down-graded.

That Soulsby is making the switch says a lot about these new positions and the role of MPs who to the whips are often seen as little more than lobby fodder.

The standard terms are for four years and this May there are a couple of other battles as well as Leicester. One is in my home borough of Bedford which the Lib Dems won in a by-election in October 2009 and the Tories are battling hard to take what they regard as theirs. In that battle Labour came in fifth with a Martin Bell-backed independent coming very close in third place.

The power of the elected mayoral positions and the size of the electorates makes these elections the most important of all in England on May 5th.