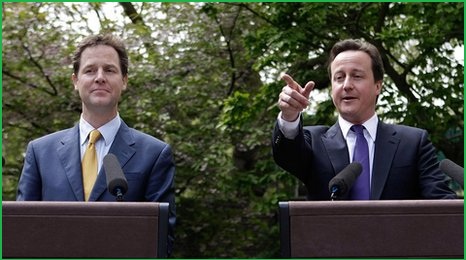 What are the chances of a 2011 general election?

It’s been a pretty depressing couple of weeks for the junior coalition party. First there was Clegg’s unfortunate “am I in charge” quip, then he had to face a pretty robust DPMQs, the go-ahead to Rupert Murdoch and now the Barnsley Central result.

Even AV, if the latest YouGov poll suggesting that support for NO is growing is correct, might not get through as easily as it looked a few weeks back.

Is now the time, it’s being asked, to get out of the coalition and take the hit this year in the ensuing general election? The sooner the party, it’s argued, starts re-building the better.

The coming months, in any case, see Lansley’s much criticised NHS changes on the agenda which is causing a huge amount of concern, on top of everything else, amongst the yellows.

On top of that there’s a fear that Cameron will have to move towards his right wing a bit more in response to the growing success of UKIP. That could leave Clegg’s party in even more uncomfortable positions.

The other side of the argument is that it was always going to get tough and the outcome of elections of any sort where the party is not in contention can be ignored. It is the results in those seats that the yellows will be defending on May 5th that are critical.

I think that the party will hold its nerve but I’m less certain than I was in mid-February.

As a precautionary measure I’ve just had a little flutter 6/1 against a 2011 general election.