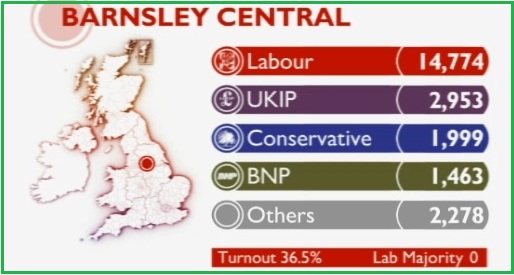 And UKIP wallop the Tories in the battle for second place

The Barnsley Central by-election result has seen voters overwhelmingly reject both coalition parties with UKIP coming in second place in what is their best ever by-election performance.

The Tories were just under a thousand votes behind in third place with the BNP and an Independent chalking up more votes than the Lib Dem.

This is far worse than the worst fears of both the blues and yellows and I wonder whether it will have an impact on the internal politics of both parties.

Cameron could be put under more pressure to deal with the UKIP threat while the LDs miserable showing could bring to the surface the worries that many in the party have about the coalition.

These are the full results:-