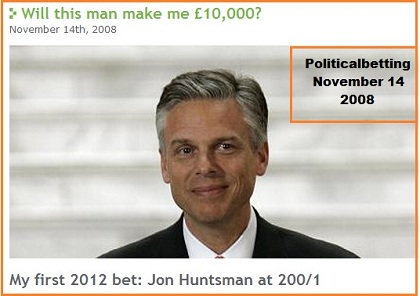 Is he the one to take on Palin – then Obama?

In the week after Obama’s victory in November 2008 I placed a Â£50 bet at 200/1 with Ladbrokes against the then governor of Utah, Jon Huntsman, winning the 2012 White House race.

It seemed a long shot but during those difficult days for the Republicans after their defeat it appeared to me that there was one potential contender who had what it would take to mount and possibly win in 2012 – Huntsman.

Quite simply everything that the fluent-Mandarin speaker Huntsman is Sarah Palin isn’t and if it should come to a shoot out between those two the GOP, I believe, would choose the one that was best equipped for the job.

My hopes of winning my bet fell sharply when a couple of years ago Obama appointed Huntsman as the US ambassador to China. Since then he’s faded out of the thinking and now even Ladbrokes don’t have him listed as a runner.

But all has changed this morning following Huntsman’s announcement that he’s planing to step down from his ambassador role in April.

Huntsman 2012 must now be on the cards and that’s how punters on Betfair have seen it. His price has tightened sharpy and he’s at 10.5/1 to get his party’s nomination.

He hasn’t entered the race yet but what else can you read into the timing?

His big negative is that he’s a Mormon like the 2008 contender Mitt Romney. The latter had his chance to get the nomination back then and my guess is that he’d have a tough job fighting off the 50 year old Huntsman.