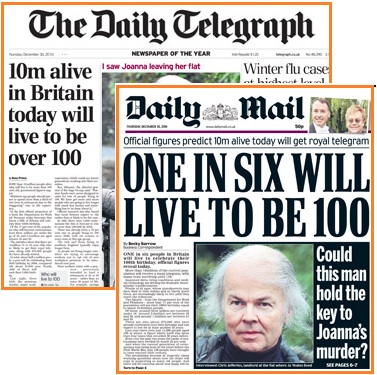 Does an ageing electorate add to the challenge for the reds?

One of the stories carried by several papers this morning is the projection by the Department for Work and Pensions that almost a fifth of Britons will live to 100.

This is all based on population trends that point to about half a million people a year celebrating their 100th birthday by 2066, compared with about 10,000 now. But this is not just a long-term development. The figures suggest that more than 2 million currently aged 51 and over can expect to reach the 100 threshold.

This clearly has massive implications for large parts of the public services which can expect demand on them to increase.

But here at PB our focus is on the impact on voting and future elections.

On the face of it this could present Labour with massive future challenges although because of their voting power all parties have to be concerned about the oldies.

Is it any wonder that in the Osborne cuts package in October the so-called pensioner perks – winter fuel allowance, free bus travel, prescriptions and TV licences – were untouched even for the very rich?