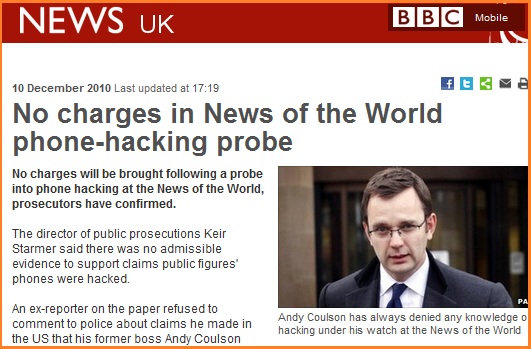 We’re at that point in the calendar when all those “will it happen in 2010” bets start to come into play. I’ve got two – one on David Law returning as a minister which I suspect won’t happen; and that Andy Coulson will survive in his job.

If that comes good it will be the second time in just three months Cameron’s press chief and ex-News of the World Editor, Andy Coulson, fortunes has produced some nice winnings.

The first market was on whether he’d by out by the Tory conference in October. Then the new market had December 31st as the end date.

The latest news is that the director of public prosecutions has said there was no admissible evidence to support claims public figures’ phones were hacked and that the ex-NOTW employee who spoke to the New York Times has not been prepared to answer questions.

The DPP’s statement said: “A number of other witnesses were interviewed and either refused to co-operate with the police investigation, provided short statements which did not advance matters, or denied any knowledge of wrongdoing.”

Will this be the end of the matter? I doubt it. The Guardian juggernaut is still moving – a bit like one of those giant super-tankers that takes takes ages to change course – and it’s hard to see them stopping in the short-term.

There’s still a bit of money available at Smarkets if anybody wants what seems a pretty certain bet.

Now what about a market on Coulson being there at the end of 2011? This guy seems smarter than any of them.