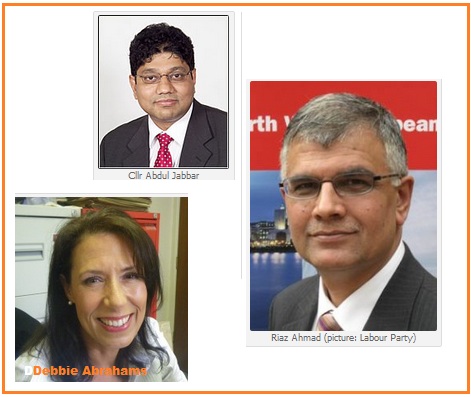 Thanks to the excellent Saddleworth News site for this – the pictures and details of the three short-listed candidates for the Oldham East & Saddleworth by-election that will take place in the new year.

Local members decide tomorrow and their decision could be critical because in high profile by-elections the candidate can make a huge difference one way or the other. Wisely Labour are keeping it local and have gone for figures who are reasonably well-known in the area.

Debbie Abrahams stood in the neighbouring Colne Valley seat in May where she came third; Councillor Jabbar is a former mayor and a senior councillor while Mr Ahmad is a former councillor and chair of NHS Oldham.

Given the cause of the by election the red team is going to find it challenging going negative and will probably try to make the campaign a referendum on the cuts and the coalition generally.

What they have to avoid is any statement or action that can be portrayed as a “smear” of Elwyn Watkins – the Lib Dem candidate who brought the successful legal challenge that led to the disqualification of Phil Woolas.

That’s going to be difficult given the passions but if they do that will be pounced upon and be accused of “being up to their old tricks again”. The last thing Labour wants is their campaign to be the issue.

A key Lib Dem message in the early salvoes has been about the “shame” that Labour has brought to the area because of what happened in May. The yellows want to remind voters of Woolas – the red team wants to air-brush him out completely.

Labour remain strong favourites with William Hill having them at 1/7. The second favourites at between 4/1 and 7/1 are the Lib Dems. Hills have the best Lib Dem price but will not allow me to place a bet at that price of more than Â£3.10. Ladbrokes have Labour at 1/5 with the Lib Dems at 5/1.