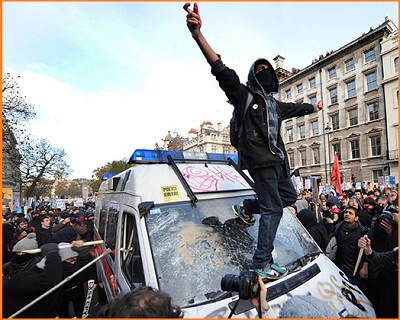 Could it just increase the anger and violence?

There’s been a strong defence by the Metropolitan police of their tactic of using what’s known as “kettling” yesterday in containing the fees protests in central London.

The plan is simple – the demonstrators are trapped for many hours in order to prevent the possibility of mass attacks that could lead to violence and criminal damage on specific targets. Yesterday it was said that they were aiming for the Lib Dem offices in Cowley street just round the corner from the palace of Westminster. Instead they were held a few hundred yards and a only a few were allowed to get out at a time.

This led to student activists describing the police approach as “heavy handed brutality”.

The Metropolitan Police Commissioner, Sir Paul Stephenson, says “the game has changed” in policing protests in a clear message that “kettling” will continue.

This is a fine balance – the last thing that the police want is for their approach to be exacerbating the situation.

I just wonder whether there would be the same level of student activity and anger if Labour had won the election and implemented the recommendations of the Browne committee which they set up. My guess is that there wouldn’t.