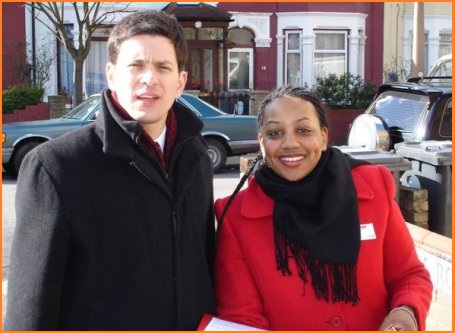 Miranda Grell – disqualified by the Woolas law in 2007

One of the things that has been said repeatedly about the Woolas case is that it is only the second instance in 99 years of this law being used to try to over-turn an election for a Westminster constituency. True.

But there is a much more recent case involving a council election. The woman standing next to David Miliband in the picture is Miranda Grell who won a seat in the May 2006 local elections on an unexpectedly large swing from the Lib Dems in a split result for the Leyton ward of Waltham Forest.

Fifteen months later she went on trial on charges under the Representation of the People Act 1983 of making a false statement of fact about a candidate’s personal character or conduct for electoral advantage.

Specifically it was said that she made allegations of paedophilia against her gay Liberal Democrat opponent, Barry Smith. Witnesses against her included her Labour running mate.

She was fined and banned from public office for three years.

At the end of November 2007 she appealed but the original decision was upheld. Following that verdict, Grell resigned from the Labour party and from her job working for the Deputy Mayor of London.

It should be emphasised that according to her Wikipedia entry, on which the information for this article is based, she continues to strongly maintain her innocence.

The law should be back in the news again today with what should be the final day of Phil Woolas’s effort to have his original ruling judicially reviewed.