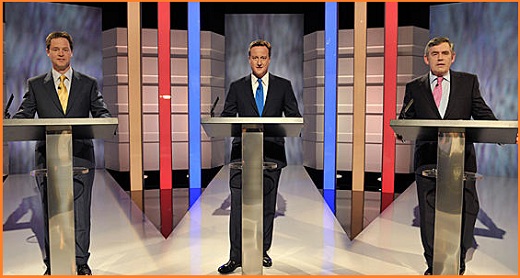 After working hard in the run-up to the election I took a break for a while, and have really only just begun the post-mortem on my predictions and the actual result.

One thing that caught my eye is this graph. For those who don’t recall, I promoted the Kalman Filter as the best way of “averaging” the polls, and as far as the critical Tory lead was concerned it couldn’t be bettered. My final forecast was a lead of 7.2%, which proved exactly right. The other feature of the Kalman Filter I mentioned was its uncanny ability to identify turning points in public opinion.

Looking at the graph, the Tory lead declined inexorably from the moment Gordon Brown fired the election starting-gun on April 6th, heading encouragingly towards the “Swingback Zone” – the area in which I could claim unqualified success for that particular forecasting method.

But on 15th April the first televised debate was broadcast, an innovation for a British general election campaign. Overnight, the election had become Presidential, and the media and poll consensus was that Gordon Brown was the resounding loser. That verdict remained unchanged after the two subsequent debates. The poll trend sharply reversed, and the Tories extended their lead all the way to polling day.

Had the Tory lead remained around the 5% mark, where it was prior to the debates, the Tories would have had a seat lead of only 16 seats. A fraction less and Labour could quite possibly have nosed ahead in seats, an outcome which I personally had never discounted.

The tentative conclusions I draw from this data are that British general elections have now become just a bit harder to forecast, and the Tories owe about 20 seats or more to Brown’s lacklustre televisual performance.

Labour’s chance of clinging on to office with the help of the LibDems slipped away, and Nick Palmer amongst others can probably blame his personal defeat on the TV debates. The genie is now out of the bottle and the Debates may again prove decisive next time…