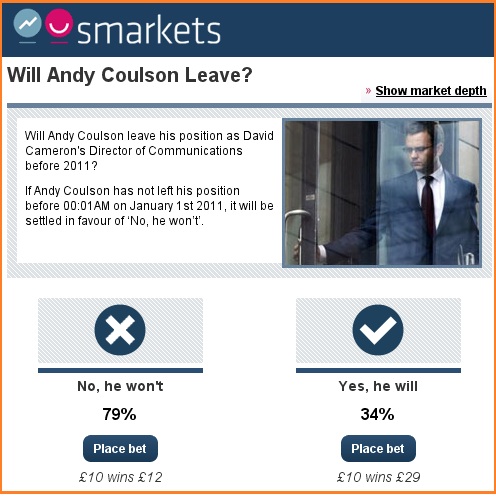 Can Cameron’s press chief continue to ride out the storm?

After the outcomes in the Labour leadership race and Ed Miliband’s choices for the shadow cabinet the number of political betting options has suddenly got more limited.

But there is one possibility – an issue that got over-shadowed during the week. This is the question of whether Cameron’s press chief, ex News of the World editor, Andy Coulson is going to keep his job.

For what he did or did not do was subject to an hour-long investigation on Channel 4’s Dispatches programme on Monday night – you can still view it here. This had been billed as providing some sort of “smoking gun” but it hardly received any attention because the big political story on Monday was the decision on child benefits.

The real problem in trying to pin something specifically on Coulson is that what was going on at the News of the World while he was in charge was also taking place in other newspapers – which perhaps explains why the story has seemed to lack traction in other parts of the media.

Talking at City University during the week the Guardian journalist who has driven the investigation, Nick Davies, said it was “bad luck” that the News of the World was singled out.

According to UK Press Gazette: Davis said: ..”It’s sheer fluke and bad luck that this newspaper is the subject of all this attention. It’s just because Clive Goodman got caught hacking the voicemails of members of the Royal household rather than ordinary punters..This illegal activity was going on in many Fleet Street newsrooms..When it comes to voicemail hacking lots of newspapers were doing it.”

The difference, of course, is that the editors at the time of those other newspapers are not now occupying a key role at the heart of the Number 10 machine.

The Coulson bet is on whether he’ll hang onto his job until the end of the year. I’ve not had a punt but I think that he probably will.