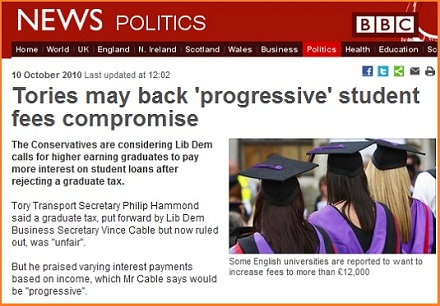 Can both sides sell it to their parties?

Right from the very beginning of the coalition on May 11th 2010 there has been a big dark shadow on the horizon – what the two parties will do about students fees.

Getting rid of them has been central to the Lib Dem policy profile for a long time and very strong commitments were made in the run-up to polling day. Such was the gap between the partners that this was one of the areas specified in the coalition agreement where Nick Clegg’s party could abstain.

As thing have moved towards decision time Tory party managers have been looking at the numbers to see if this could be pushed through by the party on its own. Mathematically this is possible but it could have provided an opening for right-wing malcontents who have felt marginalised since the tie up with the LDs was first mooted.

The initial plan for a graduate tax got stopped but now a new compromise involving higher earning graduates paying more interest on the student loans is being worked out. It sounds messy and a fudge but it might fit the bill.

Judging by an email sent out to all party members by Vincent Cable last night the LDs are preparing the ground for a compromise. There’ve been positive noises from the blues.

No doubt this will provide a big opportunity for the red team to attack and they are backing the graduate tax.

Having Cable as the key minister here might make it palatable to his party MPs – 54 of whom signed “solemn undertakings” before the election that they would oppose any increases in fees.

But hey – we are living in the world of coalition politics.