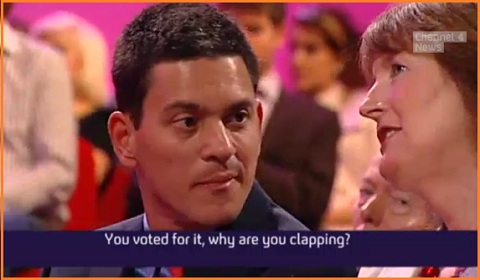 Will the sore continue to fester?

The beaten brother in Labour’s leadership election, David Miliband, is expected to make a statement today that could see the end of a front-line role in British politics.

Certainly the way that the coverage of his bother’s maiden speech developed into the story of his reprimand to Harriet Harman for clapping the statement that the Iraq war was a mistake was a good illustration of what’s likely to happen if he stays. If DM was in EdM’s shadow cabinet then every little split, real or not, would be magnified.

But how damaging will a DavidM departure be? Isn’t there a danger of it being referred to time and time again as evidence of Ed’s desire to take Labour in a different, “leftwards”, direction? You can hear the refrain – “he couldn’t even keep his own brother on board”.

And what about the new leader’s Iraq position? Can it be dismissed as opportunistic and a crowd-pleaser and is it really going to convince potential Lib Dem switchers?

During the leadership election campaign it might have gone down well with some of Labour’s electorate but EdM really didn’t convince when put under pressure on the issue during the many hustings meetings. Just remember the exchanges during the Question Time leadership debate less than a fortnight ago.

Those like Diane Abbott who were against the Iraq War all along are not going to be satisfied.

The DavidM situation also means that his position on the war is going to be probed and probed whenever he does TV interviews and no doubt Tory HQ is working out ways to exploit it during Cameron’s conference speech next week.

What a dramatic conference season this is turning out to be.