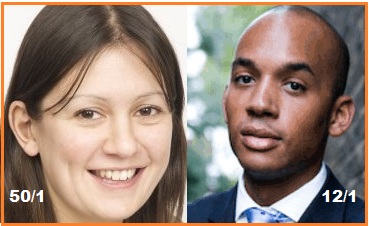 So who’ll be “The Next Leader Of the Next Generation?”

Hats off to Ladbrokes for being first off the mark to price up a market on the next Labour leader after Ed Miliband. Given Labourâ€™s loyalty to its leaders itâ€™s quite likely that Ed Miliband will be leader for the next two general elections. His successor is likely to be a new MP. Not only are political leaders younger, as Michael Crick astutely pointed out recently, young candidates have a great chance of winning leadership contests.

Ed Miliband highlighted the generational shift thatâ€™s underway in the Labour Party. Letâ€™s look at some of the new MPs on the block and consider which have it in them to go all the way. The Ladbrokes market has a number of runners listed who are not even MPs. Letâ€™s scrub them out. Instead I want to pick out 4 candidates that are already making heads turn across the Labour movement:

Rachel Reeves 20/1 Reeves is as sharp as a tack and has put in some robust performances on the banking reform and the case for a financial transaction tax and. Most recently she has worked on the impact of the budget across lower income groups. She is well connected across the Labour movement and will be a significant figure in years to come. Reeves is an economist by background and it is for this reason that I think her skills and interests will lead her to become a future Labour Chancellor/Shadow Chancellor and not as Leader.

Stella Creasy 50/1 Creasy is popular on the Blairite wing of the party and has worked on new methods of public involvement in democracy and decision-making. She is however an â€˜insiderâ€™ politician having worked as a researcher for a series of MPs and has the â€˜wonkishâ€™ tendencies which the party is turning away from. Although the Blairite wing of the party is in crisis and may never recover, sheâ€™s worth a small stake.

Chuka Umunna 12/1 Umunna () is already joint 4th favourite to be next leader and the same price as Ed Balls. He is articulate, telegenic and will prosper under Ed Miliband. Linked to the leftish Compass group but admired by those to the right of him he has star quality. He has already appeared on Question Time and so far heâ€™s managing the hype well. He has yet to built any profile within the trade union movement â€“ time will tell if thatâ€™s a good or bad thing. This guy is a classy performer. Iâ€™d say his true odds should be closer to 5/1.

Lisa Nandy 50/1 Nandy () is a battling North West MP in the style of Barbara Castle and Gwyneth Dunwoody. She has fierce style that will benefit her whilst Labour is in opposition and has an authenticity that money canâ€™t buy. Nandy is swiftly becoming a darling of the grassroots and trade union movement. Although only an MP since May she won a coveted place on the platform at the Tribune rally this week â€“ the most important fringe meeting at any Labour conference. She represents by far the best value on Ladbrokesâ€™ list and has every chance of being Labourâ€™s first elected female leader. She should be nearer to 8/1.

Itâ€™s always important to factor in the length of time youâ€™ll be holding your betting slip for, as well as the odds you get in these types of bet. On one hand these markets donâ€™t appeal. However there is some good value out there. Lisa Nandy at a huge 50/1 and Chuka Umunna at an attractive 12/1 are the stand-out bets and already the best prospects for Labourâ€™s Next Generation.