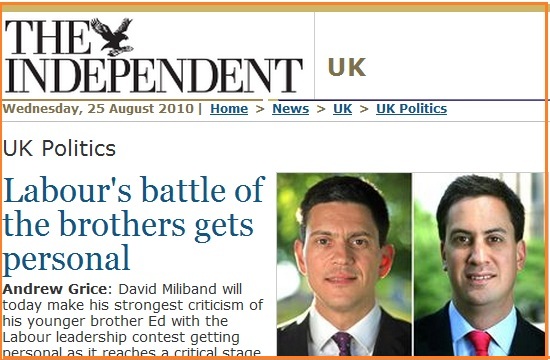 ..or is the media trying to breathe life into the contest?

After a long period when Labour’s election has failed to attract much media attention it’s all change this morning with several papers highlighting how “the gloves are coming off” between the brothers.

It makes good copy, of course, and the weird spectacle of two siblings slugging it out was always going to be the focus as we got closer to voting. But are the papers making too much of this today?

For what we are seeing from DM and EM are two hugely different approaches for Labour as it seeks to find a way of winning back. The older brother wants to take the fight with the Tories back to the centre ground while the younger is putting the emphasis on the parts of Labour’s core base which has simply stopped voting.

This is how Andy Grice looks forward to a DM speech in the Independent:

David Miliband will insist that he is the best candidate to prevent the Government painting his party as Old Labour. “We need to break out of the mould the Coalition is trying to put us in,” he will say. “Their attacks on our record are only the first phase of their campaign. They seek to make Labour irrelevant. I will not let them.”

Calling on Labour to shift to the centre ground, he will say: “We must look forwards for new ideas and outwards for a new coalition of voters..

Ed Miliband, the shadow Energy and Climate Change Secretary, moved to head off his brother’s criticism by insisting he is “the moderniser”. He said that, since 1997, Labour had lost 1.7 million middle-class voters. But he argued that Labour had lost a total of 5 million voters, with the largest losses amongst the C2, and D and E social classes.

Ed Miliband said: “I am the only candidate who can reach out to those whom we have lost.

All of the above is hardly personal but a healthy debate on the way forward.

My own observation is that DM’s is probably the right one but in the context of an inter-tribal battle EM’s ideas might resonate most amongst those who can actually vote in the election.