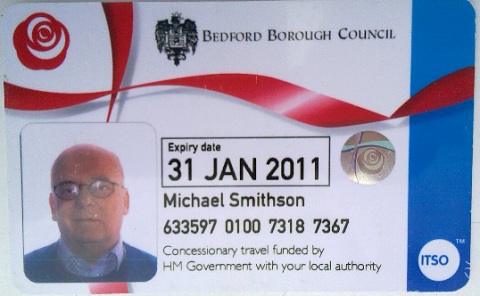 Is this the way of winning back middle class support?

I am writing this on board the excellent X5 bus – the twice an hour service that links Oxford with Cambridge. The vehicles have recently been upgraded – there are leather seats and there’s even free wi-fi.

Best of all because I am over 60 I can travel to Cambridge and back for absolutely nothing simply by showing my bus pass, see above, that is valid all over England.

It was Gordon Brown who in September 2007 announced this scheme a couple of weeks before his U-turn on an election that autumn.

This is one of those “universal benefits” that are being looked and it seems that at the very minimum new passes won’t be issued until people reach 65.

Last night, as Peter Hopkins writes on the CoffeeHouse blog, Labour leadership front-runner, David Miliband said he would “stick to universality” with benefits such as these of which the bus pass is only a minor item.

Clearly he has had to follow other leadership contenders who have made similar pledges but will he be able to sustain that if he does end up as winner?

Universal benefits are popular with those who benefit – but he’ll be pressed on what he would cut instead.

We have a dividing line.