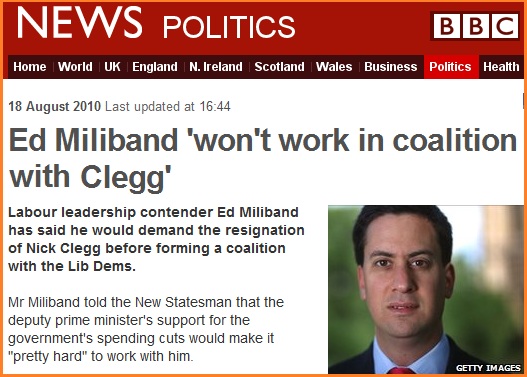 We all know that the middle of a leadership battle it’s vital to make comments and statements that chime with the party but could Ed Miliband come to regret saying that he wouldn’t go into coalition with Nick Clegg.

Who knows what’s going to happen at the next election but even with the planned constituency changes there’s a highish probability of there being another hung parliament.

And in that situation it’s likely to be the parties with the most seats who would be seeking collaboration with the smaller ones. Labour would be the suitor not the potential bride.

So ruling out one option might not be a bright idea.

Is Ed Miliband really saying that when push comes to shove that he’d prefer to remain leader of the opposition – not Prime Minister? I doubt it.