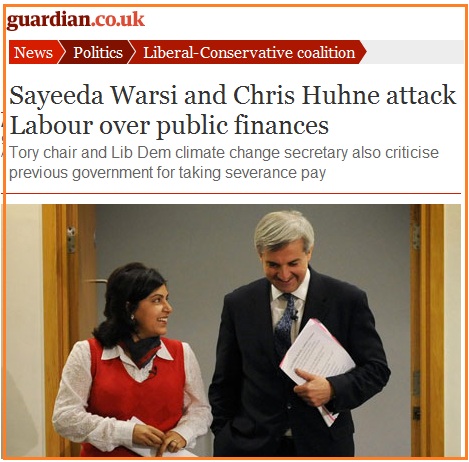 How can there now be a full-blooded Tory campaign?

A big political story in the papers this morning is the coverage of the joint political press conference by Tory chair, Baroness Warsi and the LD cabinet minister, Chris Huhne. This was a joint move to attack Labour to try put the blame on what the coalition is having to do on the former government.

For me the greater significance of this is not what they said but what it means to the coalition parties when they fight the next election.

For on May 6th Huhne’s Eastleigh seat was the 12th most important Tory target and the blues threw everything into the campaign to try to unseat the former LD leadership contender.

Huhne held on with an increased majority after a huge tactical switch by Labour supporters who saw their party share cut in half.

I guess that many of Labour voters who switched are amongst those who the polls are now showing have reverted to their former allegiance and it’s hard to see the same level of tactical voting next time.

The main essence of the Tory attack in the at the election was that a vote for Huhne would help keep Brown at Number 10. Well things have worked out somewhat differently.

Clearly there’s a very long way to go to the next election but it’s hard to see, at the very minimum, how the Tories can mount a similar campaign there to May 2010. Whether the blues stand aside in seats like this I don’t know but the resource that they put in might be much reduced.

Maybe those pictures of Huhne and Warsi helped guarantee the Lib Dem’s survival.