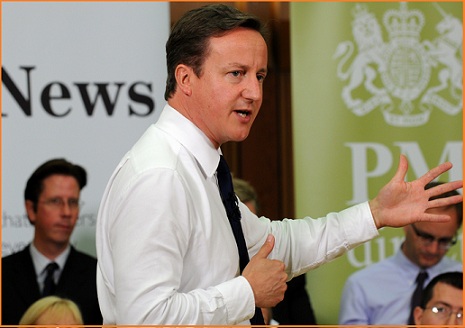 Is the real “gaffe” that he’s continuing on the road?

Inevitably David Cameron faces a fair bit of flack in the papers for his “mis-speak” about Iran having a nuclear weapon. Following his previous “mis-speak” on his US trip about what was happening during the second world war in 1940 and a pattern seems to be developing.

Whenever he speaks in public in the coming weeks parts of the media and Labour attack dogs are going to be on the look-out for more errors so they can develop a narrative about him being gaffe-prone.

But why was he putting himself in a position yesterday where this could happen? What’s the purpose of Cameron/PM Direct so far out before the next general election? And shouldn’t he be taking a break?

I was very much taken by the comment on the previous thread from Yellow Submarine:-

“The real â€œgaffeâ€ of the day is the fact that Cameron is doing PM Direct events in August at all. We wouldnâ€™t put lab rats through what we put front rank politicians through in the media age. It isnâ€™t conducive to good government and the poor bloke needs a whole month off at a country retreat..”

Having sat in the front row of such an event before the election there’s little doubt that he’s good at the non-scripted format which he clearly enjoys doing. But he’s now PM and the pressures on his time must be enormous.

Surely, as Yellow Submarine writes, August is the month to take a decent break and re-charge his batteries. Maybe all the pressure of the past year has taken its toll and that is why we are getting his mispeaks?