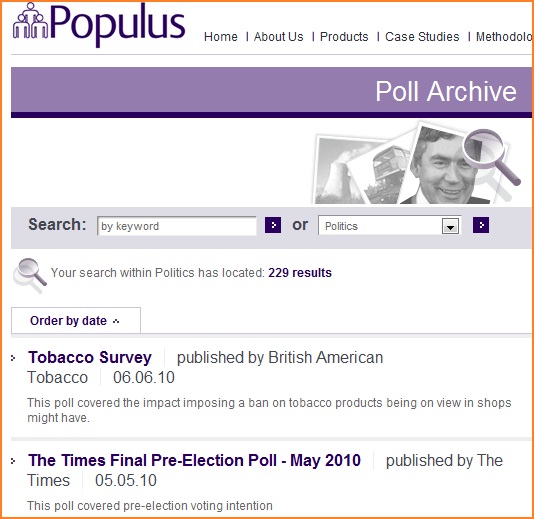 One aspect of the paywall debate and the challenge that newspapers face with declining circulations is that budgets for polling can suffer.

Carrying out a 1,500 sample telephone poll, as Populus used to do for the Times every month, is a costly business and you can see this being scaled back. The last one from the firm, according to its website featured above, was before the general election.

All this is a great shame because we desperately need a diverse range of pollsters and the paper has for decades been one of the biggest commissioners of regular voting intention polls.

Populus, which started polling for the paper in 2003, has built up a strong reputation and did very well at the May 2010 general election. In recent years the key figure at the paper has been Peter Riddell who served as chief political commentator and associate editor. He’s now taken early retirement and I wonder this has had anything to do with the lack of polling since the general election.

This coincides with the apparent end of polling at the Daily Telegraph. The paper has not had a regular pollster since February – when the News International – YouGov exclusivity agreement came into force.

Until then the paper had, like the Times, a long record of being a big backer of polling and it was the national paper that first commissioned YouGov nearly eight years ago.

Thankfully the Guardian continues with its relationship with ICM while the Sunday Telegraph has funded two post election voting intention polls from the firm. Ipsos-MORI has done one VI survey for Reuters since the election and, hopefully, the Indy and Indy on Sunday polling series with ComRes will continue.