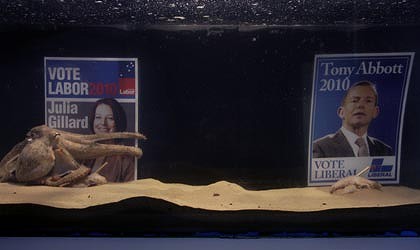 Australia has just started its 2010 election campaign, with the big day on Saturday 21 August. Much has happened in Australian politics since I last wrote an article for PB.com in the lead up to the 2007 federal election. Since then:

For much of the 2007-2010 parliamentary term, Kevin Rudd enjoyed stellar heights of polling popularity for an unusually long period of time;

The Liberal Party, having lost its long-term leader John Howard at the 2007 election, struggled to find its feet in opposition, changing leader twice before settling on current leader, Tony Abbott; and

Most dramatically, the Labor government deposed Kevin Rudd as prime minister because of bad polling, replacing him with his deputy, Julia Gillard in late June, just a few weeks ago.

Gillardâ€™s challenge to Rudd for the Labor leadership was efficient and swift â€“ it broke on the ABC news at 7pm, was followed very closely for four hours on Sky News, and scoops broke on the Twitter tag #spill. The next day, Rudd knew the numbers were against him in the Labor parliamentary caucus, he resigned the leadership and Gillard became Labor leader and prime minister unopposed.

Gillard and Abbott are unusual leaders for both their parties. Julia Gillard is Australiaâ€™s first female prime minister and Labor leader, and the first Labor leader to come from the Left faction for many years. While Kevin Rudd was electorally popular, it was Julia Gillard that anchored the leadership with the Labor rank and file. Her clear appeal to women is a feature of most opinion polls.

For the Liberals, Tony Abbott has for some time been the anchor of the socially conservative Right of the Liberal Party. His assertive style and values system has certainly re-energised the Liberal-National coalition but inflames his progressive opponents. He will hope that his distinctive style will appear â€œauthenticâ€ and so reconnect his party with swinging voters in marginal seats.

As a Westminster-based system, Australiaâ€™s government is decided by who has a majority in the 150-seat House of Representatives. Rather than go over ground covered more expertly elsewhere, I recommend Ben Raueâ€™s website, â€œThe Tally Roomâ€ for details on how each electorate voted last time, down to the polling booth. Ben is to be commended for an outstanding resource.

The bookies are clearly favouring Labor at this stage â€“ Laborâ€™s odds with Centrebet are $1.23 with the Coalition at $3.90. Since the Labor leadership change the money has steadily returned to a Labor win. For fuller details on tracking the polls and the bookies I recommend Scott Steelâ€™s â€œPollyticsâ€ blog in the progressive e-zine Crikey group.

Finally, thereâ€™s no fun writing about other pundits if you donâ€™t indulge in a bit of crystal ball gazing yourself. The numbers â€“ and electoral history over the last 40 years â€“ tell us that the Government is likely to be returned. Depending on how the leaders perform, various seats on either side may be in play â€“ but unless something big happens, Julia Gillard will have the biggest smile on election night.

Alexander Drake posts as â€œNorth Sydney Correspondentâ€ on PB.com and has been both an adviser to Liberal governments in Australia, and at Conservative Central Office in the UK.