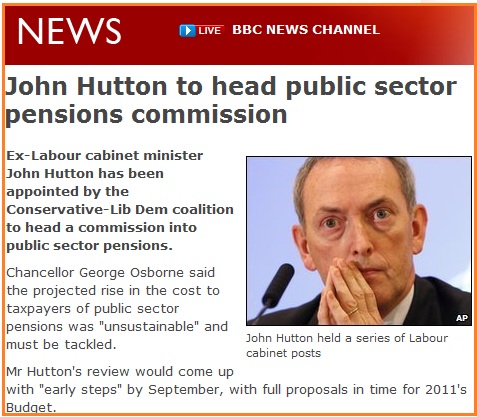 Would the best approach been to have kept quiet?

There’s been a furious reaction from the former Labour deputy PM, Lord Prescott, to this morning news that his former cabinet colleague, John Hutton, is to head up the government’s commission into public sector pensions.

Linking the action to moves by Kate Hoey and Frank Field he writes: “Now we have the unedifying spectacle of John Hutton, Labourâ€™s former Work and Pensions minister, chairing a new Independent Pensions Commission with the obvious aim to dismantle state pensions.

Another thing all three had in common was that they all tried to stop Gordon Brown becoming leader so perhaps we shouldnâ€™t be surprised theyâ€™re happy to join a Tory-led coalition.

Theyâ€™ve now turned a Con-Lib Government to a ConLibLab one and made themselves human shields for the most savage and heartless Tory policies in 20 years. Policies that will hit the poorest and most vulnerable the hardest â€“ the very people Labour was founded to protect.

I would ask if they can live with their conscience but Iâ€™d question whether they even had one to begin with.“

Maybe the plan was to warn other potential Labour figures not to follow suit – but the consequence of Prezza’s action has been to put more focus on the story and make into into something of a coup for George Osborne. Keeping quiet would, surely, have been the smart move.

Hutton, of course, is no stranger to controversy and last December admitted that he’d been the cabinet minister who had given briefings about Mr. Brown being a disaster.